What used to be a predominantly neglected industrial area is now London’s newest pride & joy – Olympic Park. The final wildflower meadows were seeded a few days ago and should be in full bloom by the opening of the games, creating a sea of gold around the Olympic Stadium. 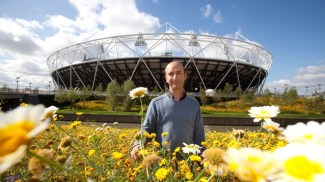 There has been a lot of hard work involved to take this neglected industrial area and transform it into this 250 acre public park. The largest urban park created in Europe for more than 150 years that is intended to be a sustainable, bio-diverse & beautiful area. The annual and perennial wildflower meadows alone cover over 10 hectares of land, that’s larger than 10 football fields!

Annual wildflower meadows near the Olympic Stadium have been sown with tickseed, cornflowers, corn marigold, star of the veldt, Californian poppy and plains coreopsis. In the last two years the meadows were sown as test runs to ensure that plans don’t go awry. They needed to perfect irrigation, cutting back & late sowing to ensure all will be in full bloom for the opening ceremony. The idea is that all of the wildflower meadows surrounding the Olympic stadium will be blooming a glorious gold colour simultaneously, effectively wrapping the stadium in a blanket of gold. All of these blooms attract butterflies and bees, an important step in ensuring they will be self sustainable in the future.

Perennial meadows were created 2 years ago so they would have plenty of time to take root and establish themselves in time for the games. These meadows contain a mixture of thyme, calamint, origanum, viper’s bugloss, wild carrot, musk mallow, several species of geraniums, devil’s bit scabious, red clover and great burnet. 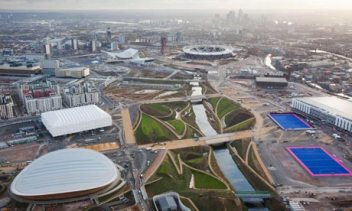 The Wildflower meadows are only a part of the extensive landscaping that has taken place over the last few years. 4000 trees, 300,000 wetland plants, over 150,000 perennial’s & bushes and 15,000 square meters of lawns were completed last Autumn. There is also the riverside garden which has been arranged into 4 different regions; Europe, Americas, Asia & the Southern Hemisphere.

The Royal Horticultural Society has created the Great British Garden, which overlooks the stadium featuring gold, bronze and silver areas. This garden boasts a ‘de Coubertin oak’ grown from an acorn that came from a tree planted in 1894 as a thank you to the people of Much Wenlock for inspiring the founding of the Olympic Games.

All of this has a great impact on the environment creating a new habitat for many different species from otters to toads, bats to moths and eels to snakes! And of course countless butterflies and bees. Even though this is one huge urban park there won’t be a shortage of seating for park revelers, benches and seats have been built into the park in such a way that you’ll never be more than 50 meters away from somewhere to sit. Provided of course that some one else hasn’t beat you to it!

I love flowers! I enjoy writing about them as well as gardening. Mostly I love finding new and unique flower gardening ideas I encourage you to post regularly on this blog, and send in guest blogs or ideas for new blogs as well. New and exciting blogs are always welcome I intend to post a lot of interesting facts and fun stuff about flowers, as well as info on many varieties of flowers.
View all posts by Connor Lowry →
This entry was posted in Flowers in the News, Wild Flowers and tagged Garden, London, Olympic Park, Urban Park, wild flowers, Wildflower. Bookmark the permalink.