A Floral Mystery from Space

The Ganjoji temple in Japan has a very old Cherry Tree, it’s estimated to be about 1250 years old.
In 2008 some cherry stones from this tree were sent into space. They stayed on the International Space Station for 8 months, orbiting the earth a remarkable 4100 times. Upon their return they were sent back and planted.

The first amazing thing that happened is that they sprouted! A stone from this ancient tree has never sprouted before, ever.

This particular type of Cherry Tree doesn’t bloom until it’s 10 years old so you can imagine the surprise and delight when the 2nd amazing thing happened, it bloomed at the age of 4! A full 6 years before it was supposed too!

Not only did it bloom but the blooms are somewhat unusual…  On the parent tree each bloom has around 30 petals, on the space tree the blooms have only 5 petals each.

This is not the only space tree that has grown from the cherry stones, over 250 of them were in space. Upon their return most of them were sent to a lab for testing but the rest returned to their original 14 locations. Of those, 4 of them have bloomed early, each with the 5 petal blooms.

As there was no control group to compare with, there is no definite answer that being in space before planting is responsible for the rapid growth and early blooming, however Tomita-Yokotani, a plant physiologist said:
“We still cannot rule out the possibility that it has been somewhat influenced by its exposure to the space environment. Cross-pollination with another species (on earth!) could not be ruled out, but a lack of data is hampering an explanation. Of course, there is the possibility that exposure to stronger cosmic rays accelerated the process of sprouting and overall growth. From a scientific point of view, we can only say we don’t know why.”

And so it remains a space mystery! 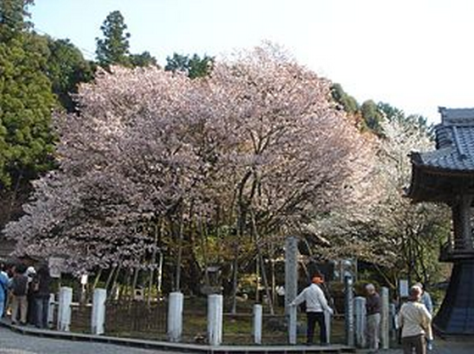 I love flowers! I enjoy writing about them as well as gardening. Mostly I love finding new and unique flower gardening ideas I encourage you to post regularly on this blog, and send in guest blogs or ideas for new blogs as well. New and exciting blogs are always welcome I intend to post a lot of interesting facts and fun stuff about flowers, as well as info on many varieties of flowers.
View all posts by Connor Lowry →
This entry was posted in "Just The Facts", Flowers in the News, Weird and Wacky and tagged 1250 year old cherry tree, cherry tree, Ganjoji Temple, space tree. Bookmark the permalink.